Here are some vintage puppet collectables that I think are extra-super-awesome! These are the Simpson Sears Winnie the Pooh puppets from the late 1960s or 1970s, that were made in Canada by Mighty Star. During the same time period Mighty Star also produced the very popular cartoon character hand puppets and plush toys of several Looney Tunes characters, Hanna Barbera characters and the Pink Panther. In my experience, I find these Sears Canada Winnie the Pooh puppets to be very rare as I've NEVER seen them on e-bay or online anywhere... so this could very well be their first appearance on the internet!

I found Winnie and Piglet together years ago in the late 1980s or early 1990s at a second hand store. About 10 years later I was very happy to find Eeyore at the Stittsville Fleamarket. These are the only characters that I've ever found from this set, and I've never seen copies of these anywhere. I would love to know more about them so please post a comment or contact me if you have any additional info to share. Here are some other views of the puppets: 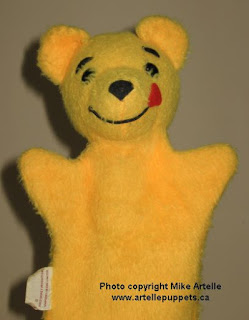 For some reason Winnie has his Sears tag sewn into his side rather than at the puppet sleeve opening as is the case for the other two puppets. The larger Mighty Star tag shown below is attached at the puppet sleeve. You can see that the tag says "Made by Mighty Star Ltd, Montreal, Quebec, Canada". The smaller print says "This label is affixed in compliance with the Upolsterd and Stuffed Articles Act, 1968 of Ontario", so the puppets would not have been made before 1968. Pooh also has plastic button-like eyes attached with a fastener, while the other characters simply have felt eyes.

The Sears tags are embroidered with a small picture of Pooh holding a honey pot. The back of the tag says "Ó Walt Disney Productions / Simpson-Sears Limited"

The Piglet puppet reminds me of Finnegan the dog from the Mr. Dressup TV show because of the eyes and the floppy ears. Piglet has a huge head compared to the other two characters. As the Disney Pooh characters were drawn with stitching lines, Mighty Star used wide stitches in selected spots so that the sewing would show. It's a nice detail that is often overlooked for these characters. Each puppet was made with a plastic tube at the neck for the puppeteer's finger to go into. Unfortunately the tube is missing from this Piglet puppet.

Here's Eeyore, who was always my favourite Winnie the Pooh character. He's also my favourite of this set. Eeyore's tail is attached with a snap button allowing it to be removed. I'm glad it's still there and wasn't lost! Below you can see the rivet inside the puppet with the word "Canada" on it. Above that are the letters RAU, though I don't know what that indicates. Just above the rivet you can also see what is left of the larger white tag that was cut off by a previous owner.

And there you have it, the Simpson Sears Winnie the Pooh puppets by Mighty Star! It would be cool to find a Tigger for this series. I've seen a Tigger hand puppet on e-bay that was from the 1960s and sold at Sears stores only in the United States, however that puppet was not part of this Canadian set and is also not made by Mighty Star, so the search continues! There must be others out there...somewhere!

UPDATES:
In Aug 2014 I received an e-mail from "Derek" who sent me a photo of an identical Sears Winnie the Pooh puppet that still had the original red shirt (shown below). The shirt looks like it is made out of red felt and it has yellow printed letters spelling "Pooh" on the front. This is the first time that I've ever seen another one of these puppets! It looks like the head on this Pooh puppet might be slightly larger that the one I have, though it could also be that the plush on mine has been flattened from being played with over time. 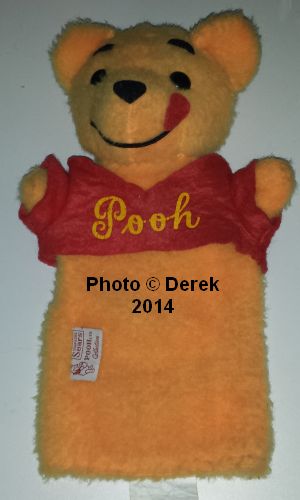 In April 2015 I received an e-mail from "Sara" who sent me photos of what looks to be the Tigger puppet from this set. It has the same white and red Sears Pooh tag attached (shown below) and similar felt eyes and eyebrows as Piglet, along with the large stitching detail at the seams. So I'm fairly confident that it is the Tigger puppet that goes with this set, which confirms that one was in fact made!!! Very awesome news! 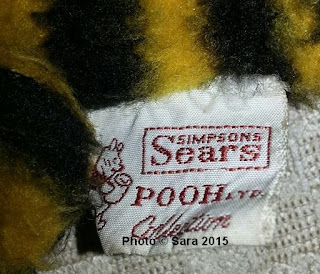 If anyone has more info about these puppets please do contact me! I'd be glad to hear from you even if it is just to confirm that you have one of these puppets as they do seems to be rare...feel free to send a photo too, if you wish!

Thank you in advance!

Posted by Mikey Artelle at 3:34 PM