I've always liked Pinocchio, even before I became a puppeteer. The Disney Pinocchio movie was one of the first incarnations of Pinocchio that I recall watching or reading about. There is also the stop-motion Rankin-Bass TV show "The New Adventures of Pinocchio" that I enjoyed as a kid.

However, I didn't start collecting Pinocchio toys and books until I was in my late 20's so this collection isn't as crazy as my Muppet memorabilia collection, or my Mego doll collection, but I have managed to find a few neat things which I think are worthy of being featured on a blog. Eventually I'll post pictures of all of my Pinocchio collectibles here, but for now I've posted a few items just to get things started...

Pinocchio, Walt Disney Productions, animated movie, 1940
The animated Pinocchio movie by Walt Disney established what has arguably become the most well known version of Pinocchio in modern pop culture. It's quite remarkable actually, that 75 plus years after it's debut the Disney film is still so well known. There are many, many versions of Pinocchio that have come and gone in that time, however Disney's Pinocchio is such a well done film that it has remained relevant for generations. 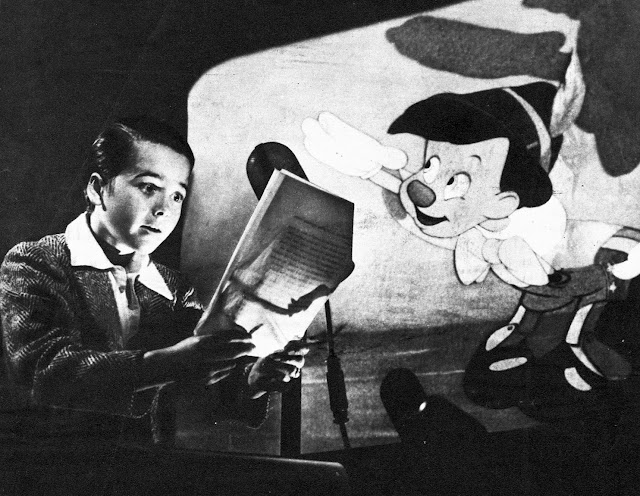 Dickie Jones is the child actor who voiced Pinocchio in the 1940 film. He later found roles in many western productions and was billed as "the world's youngest trick rider and trick roper". At one point Jones also had a role in the Our Gang serials, which later generations know as The Little Rascals. He passed away in July 2014 at the age of 87. This information and the above image are from a Washington Post online article by Matt Schudel found at this link: https://www.washingtonpost.com/entertainment/dickie-jones-child-cowboy-who-became-the-voice-pinocchio-in-disney-film-dies-at-87/2014/07/08/a22918f4-06cc-11e4-a0dd-f2b22a257353_story.html 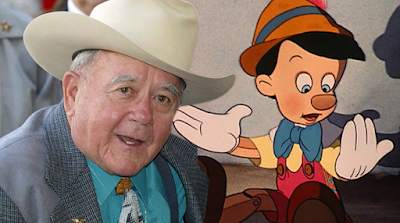 
Below are some Disney Pinocchio items from my collection: 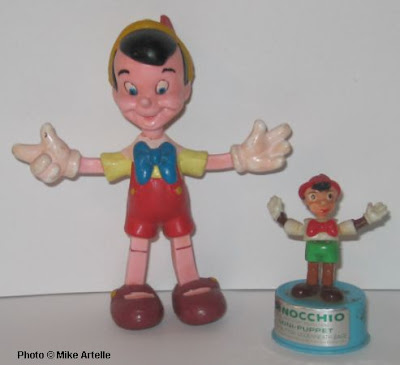 Pinocchio 5 inch bendy figure (Above left) I bought this at a flea market in 2013. It looks like it says PAI MFG Co. Ltd. on the back but the letters are quite small so I can't quite make them out. Unfortunately there's no date. Based on the way it's painted this toy looks like it could have been made between 1970 and 2013.

Pinocchio Push Puppet by Kohner Bros Inc, 1960's (Shown above right next to the 5 inch bendy figure for size comparison) This puppet with the base is 2-5/8 inches tall. These were made in the 1960's. I have the matching Jiminy Cricket push puppet too, which is shown below. Both of my push puppets still have the sticker label, which is often peeled off. I've shown a closer view of the Pinocchio label below. In the top right corner of the label over the last "O" there is "No. 3990" but it's hard to see. The same number appears on Jiminy Cricket's label, shown below. 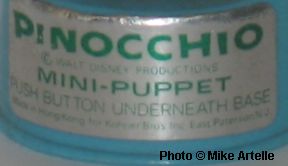 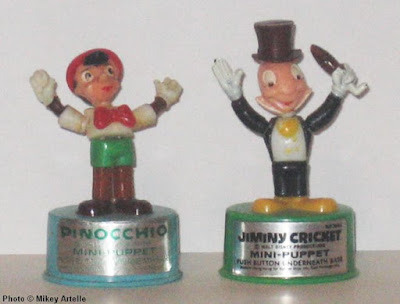 The matching Jiminy Cricket push puppet from this set has a Caucasian face instead of a green face, which is a bit odd, especially as he's standing on a green base which proves that they had green plastic available. Pinocchio's shorts are also green. Regardless, these are awesome vintage push puppets and I'm glad to have them in my collection. 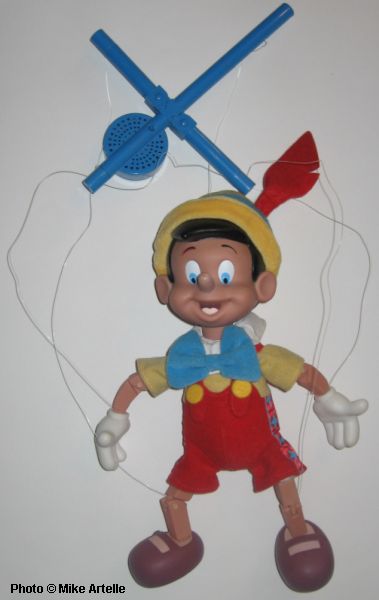 Pinocchio Marionette This toy puppet is 13 inches tall (figure only) and was manufactured by Hosung. It was likely made between the late 1990s and 2012. I bought this one second hand in Aug 2012, and unfortunately the manufacturer's tag was cut off by the previous owner. The plastic marionette control has a speaker box, and when a button is pressed it plays a short instrumental version of "Hi Diddle Dee Dee". Below is a side view to show more of Pinocchio's hat.

Many thanks to Kevin for contacting me with some info about this puppet! He has a Mint in Mint Box copy of this Pinocchio and it looks awesome! I'm sooooo jealous! 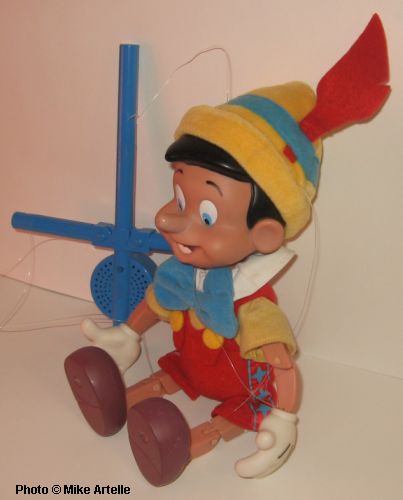 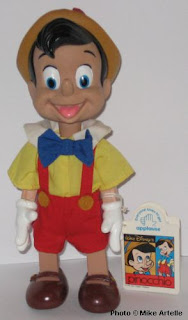 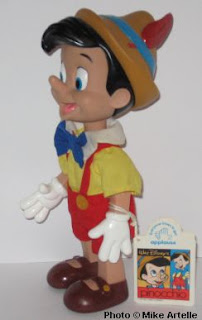 Applause did an excellent job on this Pinocchio doll. It looks exactly like the Disney character. The head is especially well sculpted. I only wish they had made the arms more pose-able as they only move back and forth, they can't be positioned out to the side. A ball joint at the shoulder would have allowed more movement. This doll reminds me of the Dakin cartoon character dolls from the 1970's, which I've also been tempted to collect. I have several Pinocchio PVC figures made by Applause that I'll post here eventually too. 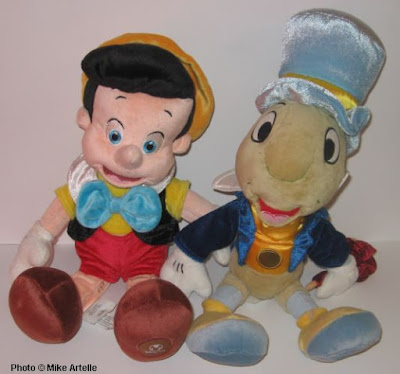 Disney Store 16 inch plush toys, made between 2000 - 2003 These are really well made and very soft plush toys that I bought at the Disney Store which used to be at Bayshore Shopping Center in Ottawa, ON.

This show was a regular in re-runs on TV throughout the 1970's that I watched whenever I could. It had a very catchy theme song that I still remember after all these years: "Oh Pinocchio was a happy soul since the day he lost his strings, I can walk and talk and fly, do anything I try!"

There was a fair amount of memorabilia generated from this program including comics books, games, puppets, plush toys and more. Larry Mann did the voice for Pinocchio's nemesis Foxy Q. Fibble. He had previously worked with puppeteer John Conway as co-host for the CBC TV show Uncle Chichimus (1953 -1954) that was directed by Norman Jewison, and as a guest host on Adventures of Chich (produced 1957-1958). Larry Mann also voiced Yukon Cornelius for the classic Rankin-Bass stop-motion TV special Rudolf the Red-Nosed Reindeer. 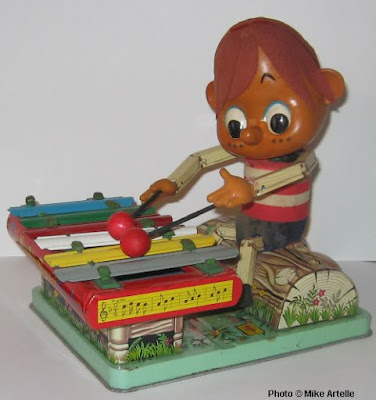 Pinocchio Tin Toy The coolest toy based on this program in my opinion is the tin toy of Pinocchio playing a xylophone. This was made sometime between 1960 and 1969. I'm not sure what company made it as the only markings say "Rosko R Tested". After years of searching I finally found this one in the 1990's at a nostalgia show (this was before the internet!). It's in rough shape though, as the shoulder section is missing. Pinocchio's rubber/plastic head is also starting to "sweat" due to it's age. 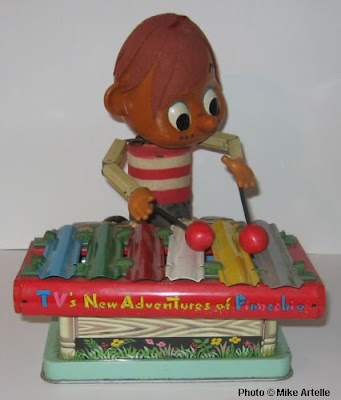 This toy is seen in a popular segment from the Sesame Street TV show called "Song of Ten" that was produced in 1969. The segment shows 10 automated tin toys in motion as child calls out how many toys there are. The segment ends with a bakery man (voiced by Jim Henson) falling down some stairs with a tray of cakes. Below is a link to the Muppet Wiki page about this segment along with a photo of the scene in question. I added a circle to show where the Pinocchio toy is.
http://muppet.wikia.com/wiki/Numerosity#.22Five_Song_.28Song_of_Five.29.22 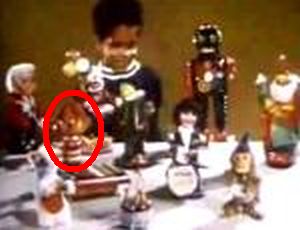 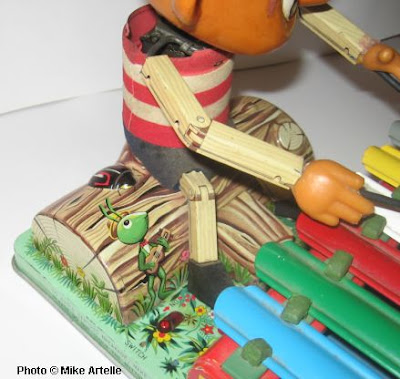 Pinocchio's Talking Cricket friend is included as an illustration. The red off/on switch for the toy is near the Cricket's feet. You can also see how the shoulder section on this toy is missing. 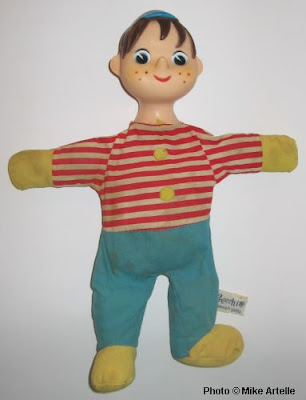 Pinocchio 11.5 inch doll by Knickerbocker, 1962 This is a small doll with a rubber/plastic head. Unfortunately there's not much left to this doll. The stuffing has deteriorated significantly and the fabric is quite worn out, which is why I took the picture of the doll laying flat. There is a matching Cricket doll in this style. I've also seen a marionette version of this doll and a larger version of the Pinocchio and Cricket dolls with fake fur fabric for the bodies.

This item can also be linked to Sesame Street: In the early 1970's the Knickerbocker company, which made this Pinocchio doll, would produce an assortment of the very first Sesame Street plush toys. Here is a link to my Muppet Memorabilia blog showing the Sesame toys:
http://mikeysmuppetmemorabiliamuseum.blogspot.ca/p/sesame-street-1969-1979.html 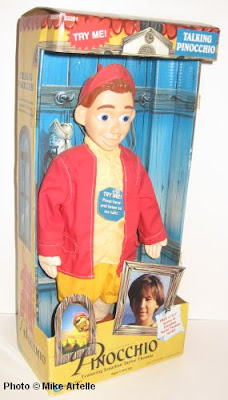 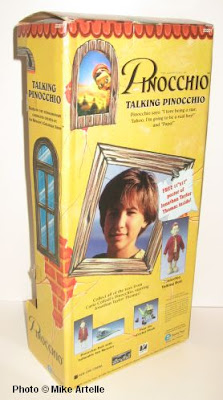 The Jim Henson Creature Shop produced an excellent live action Pinocchio movie that was released theatrically in 1996. A not so excellent "direct to home-video" sequel followed shortly after. Shown above is the 12" talking doll made by Equity Toys in 1996, based on the original film. The front and back of the box are pictured. This doll comes with a small poster of Jonathan Taylor Thomas who did the voice for Pinocchio in the 1996 movie and appeared at the end of the film when Pinocchio becomes a real boy. A marionette (string puppet) version of this Pinocchio doll was also made, but is not shown here, as well as a smaller 8" doll, shown below.
The 12 inch doll has a plastic head and a fabric, stuffed body including the hands and shoes. Pressing the doll's chest will activate the talking feature... if the batteries are working! Finding replacement batteries for talking dolls can be a bit of a challenge as there isn't a universal standard for the exact size or numbering of the small round type of batteries often used. That's one of the benefits of pull string talking dolls, they didn't require batteries. However they do tend to play too quickly after the spring looses its tension, so there are problems with either type of talking toy. 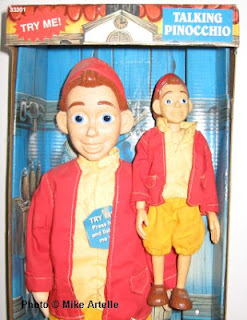 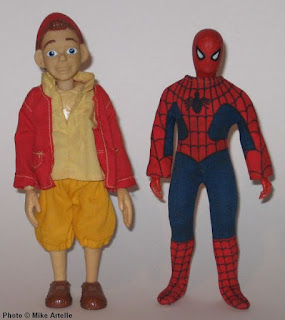 Here is the 8 inch Pinocchio doll shown next to the 8 inch Mego Spider-Man for size comparison. This Pinocchio doll's yellow shirt and red jacket are made as one piece, so that the jacket is actually part of the shirt. The pants are a separate piece.  Pinocchio's hat is a red plastic sculpted shape that was permanently attached forming part of the head. (The clothing and hat for the 12 inch talking doll are made the same way.) The shoes are sculpted and painted as part of the doll's legs and are not removable. I find that the doll's arms are a tad too long, but otherwise this Pinocchio doll is very well made. 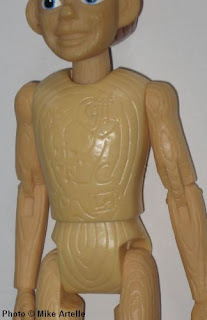 One of the unique aspects of this 8 inch doll is that the entire surface of the body has been given a wooden look, which is a nice detail to see. It would have been quite easy to just do the forearms and legs with the wooden look and leave the body blank, as Mego often did (such as their Lizard doll from the World's Greatest Superheroes series). The chest also has specific designs that were seen in the movie. Oddly enough, the doll has sculpted joints at the waist, elbows and knees (shown above and below) that don't actually function. The joints that do work only allow for very limited, basic movement. The arms and legs move back and forth at the shoulder and hips, and the head turns. None the less, I think this is an awesome doll as it's very well detailed to be movie accurate. 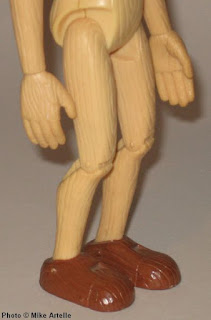 These are just some of the items in my Pinocchio collection. I'll add more to this page eventually!
This link will take you back to the Home Page of this blog:
http://mikeyspuppetryblog.blogspot.ca/