Hey everyone, it's HR Pufnstuf!

Sing with me! "HR Pufnstuf, can't do a little 'cause you can't do enough"

As a new feature for my puppet blog I'm going to spotlight a new puppetry character collectable each month. So I thought the best choice for the first post would be the lovable and goofy looking HR Pufnstuf, the Mayor of Living Island.

Here is the action figure of Pufnstuf made by Living Toys in 2000 as part of the Krofft Superstars series. Below is the back view of the figure. This figure has eight points of articulation: neck, shoulders, wrists, legs and tail. It's a very well made action figure with a lot of detail. An excellent addition to a Pufnstuf or Krofft collection. Yep, Pufnstuf is one weird looking dude!

Created by Sid and Marty Krofft, the HR Pufnstuf TV show premiered in Sept 1969 and ran for 17 episodes. The shows were re-broadcast numerous times throughout the 1970s, gaining fans of all ages. However Pufnstuf wasn't the only star. Who can forget the awesome Billy Hayes as the comical villain Witchiepoo, and her bumbling henchmen Orson Vulture, Seymore and Stupid Bat! There's also Jimmy, performed by 16 year old Jack Wild who has a remarkable talent for dancing and singing. My favourite song from the TV series is "How Lucky I Am" from episode two. Jimmy's pal Freddy Flute and other puppet characters make the program that much more enjoyable. HR Pufnstuf is an imaginative TV series that I'll always enjoy.
Pufnstuf vs Kermit the Frog
Something that I find interesting about Pufnstuf, is that he has a pointed collar not unlike Kermit the Frog. So who was first to wear the pointed collar on TV? I suspect it was HR Pufnstuf. Since 1955, Kermit was simply a lizard without a collar. In 1968 he had been transformed into a frog for the production of "Hey Cinderella", however that TV special stayed in the can for a few years and did not air on television until 1970. Therefore, it seems likely that Kermit's first TV appearance as a frog, with the pointed collar, was for the first episode of Sesame Street in Nov 1969, more than a month after Pufnstuf made his TV debut in Sept 1969. However, it's also possible that Kermit made an appearance as a frog on the Ed Sullivan show in 1968 before his Sesame Street debut, and before Pufnstuf, though any footage I've seen from the Ed Sullivan program shows Kermit as the "lizard" who had not yet become a frog. In any case, I find it an interesting coincidence that similar green collars appeared on both of these characters around the same time in late 1969.

This is a great CD set for Krofft and Pufnstuf fans that was available in 2010. Sid and Marty Krofft's Saturday Morning Hits has a selection of episodes from several of the Krofft's best programs, including HR Pufnstuf, Bigfoot and Wildboy, Sigmund and the Sea Monsters, Lidsville, and several others. The complete series of HR Pufnstuf is also now available on DVD. Obsessed Krofft fans (like me!) would also be interested in the original Pufnstuf movie, that was released on DVD in 2011. Though it's interesting to watch for nostalgia sake, the movie is not as much fun as the TV series.
﻿
Posted by Mikey Artelle at 11:38 PM No comments:

Ho Hi! I've been collecting Muppet Memorabilia for many years and have put some of the collection online. Take a look! http://mikeysmuppetmemorabiliamuseum.blogspot.com/ 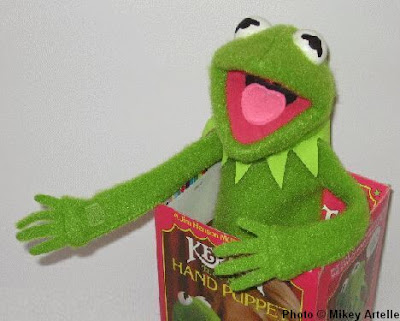 Posted by Mikey Artelle at 6:51 PM No comments: