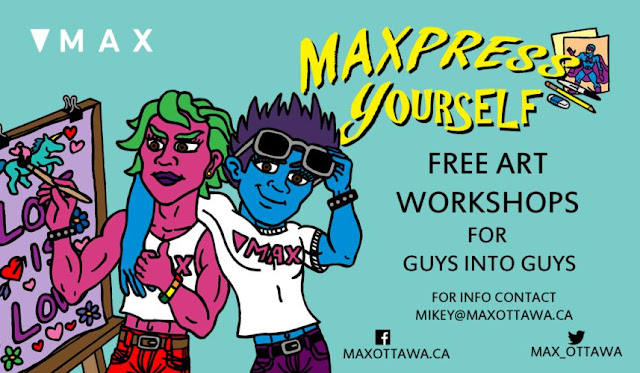 If you're a guy who is into guys and looking for a relaxing social activity away from the bar scene, join us at Max Ottawa (251 Bank St.) on the 2nd Tuesday each month for a free art workshop! No experience is needed! Come out and try something new, make your own creation, or just have fun making a fabulous mess! :) All supplies are provided.

I'm quite happy to be involved with Max Ottawa as the organizer and presenter of these art workshops. We do a variety of art projects, so I explain the step by step instructions for the group to follow, and help out wherever needed. By the end of the workshop you'll have your own creation to bring home!

All workshops are free for guys who are into guys, who live in the Ottawa-Gatineau area. So don't stay cooped up at home by yourself, come on out and join us! Whether you're a shy guy (like me!) or outgoing, young or young at heart, we look forward to meeting you

Posted by Mikey Artelle at 11:07 PM No comments: 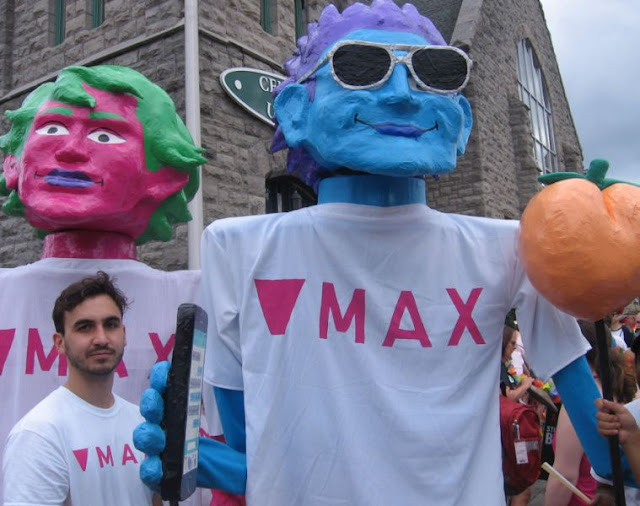 Here are the two giant puppets that I made for Max Ottawa with help from Max Ottawa's awesome volunteers! Max Ottawa is a gay men's heath organization that I did some art workshops for over the summer. The puppets were built in July and Aug 2018 for the Pride Parade held on Sunday, August 26, 2018.

The pink puppet on the left of the photo is named Eric, after Eric Levitt, the super, terrific, awesome, coordinator of this puppet project for Max Ottawa! The blue guy is Max himself! The cool dude in the bottom left corner is Lucien, one of the many volunteers who helped to build and paint the four puppet hands, and paint the blue head and neck. They also sculpted and painted some emoji shapes (a peach, an eggplant and some water drops). I sculpted the heads and made the bodies of the puppets. Lucien also helped to operate the blue puppet's right hand during the parade, while another volunteer, David, was on the left hand. The Pink puppet was operated by volunteers Steve, Joel, and Nathan as well as Eric. In addition Matt Harding, Community Coordinator for Max Ottawa, played a big role in making this project happen, and he even helped to make the puppets too. Everyone did an amazing job! This was a fun project and I'm very greatful that Max Ottawa gave me this opportunity to build some giant puppets for them. :) 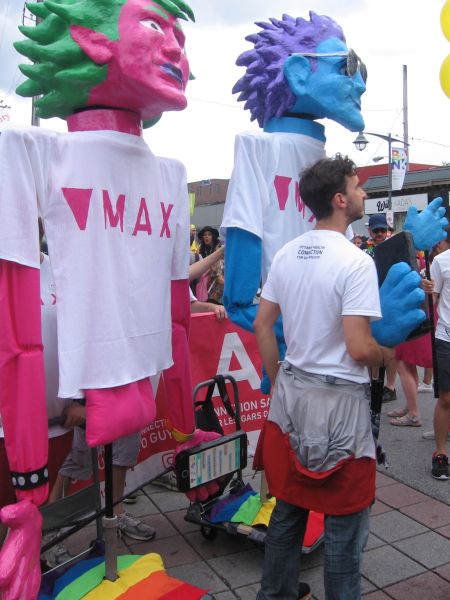 Another view of the puppets to show that they were mounted on trollies.
You can also see the arm rods in this photo.

Posted by Mikey Artelle at 10:04 PM No comments: 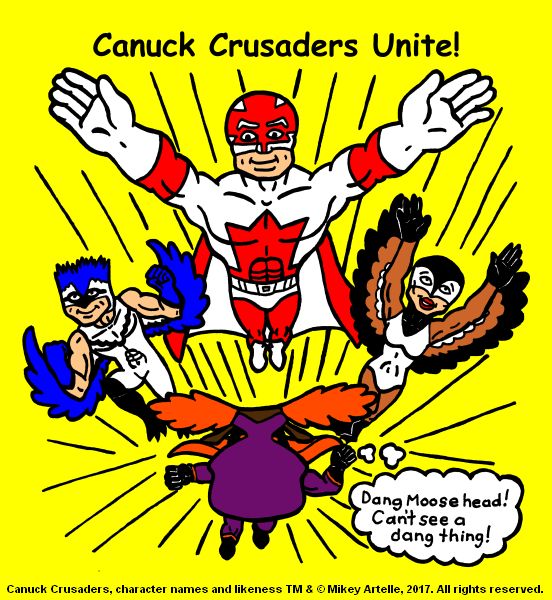 Hey there superhero fans! Here's a look at my Canadian superhero team Canuck Crusaders in action! The gang will soon be featured in my Pythor Comics storybooks, now in the works!!! Shown above is Canadian Crusader (aka. Melvin Maples), his trusty side-kick Blue Jay Boy, super heroine Goose Gal, and the mighty Moose Man!

Posted by Mikey Artelle at 1:26 AM No comments:

Max and Mikey: Art Workshops for Guys into Guys

I have some awesome news for GBT2Q guys, and other guys who are into guys! Starting May 22nd I will be doing a series of creative art workshops for Max Ottawa which will be presented until July 31st. Check out the schedule below and contact Max Ottawa to register. Workshops are free for those living in the Ottawa area. So if you're a guy who is into guys and want to broaden your social circle while having some creative fun, please join us. I'm so excited about doing this!!! Hope to see you there!
Please note: The summer 2018 workshop series has now concluded.
Here is the winter 2018-2019 workshop information. 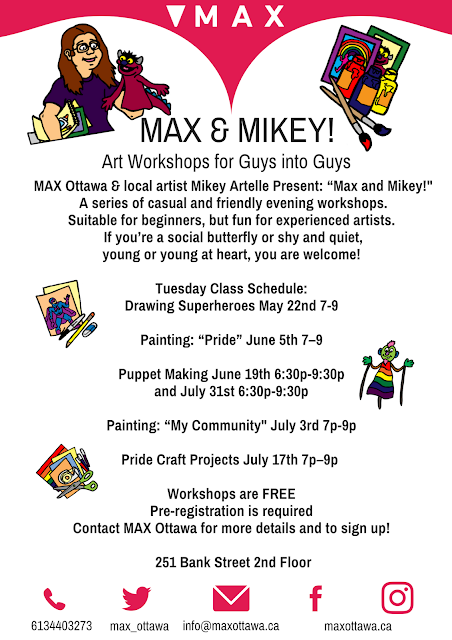 Posted by Mikey Artelle at 12:23 AM No comments:

Reminiscing about Mr. Dressup and his puppet pals! 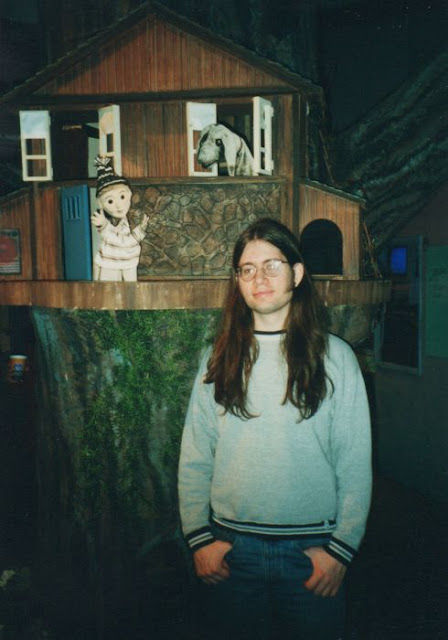 Back in 2001 the Canadian Museum of History, which is located in Gatineau, Quebec, just across the river from Ottawa, had an exhibit about the history of children's television as produced by the CBC. It was called Show and Tell: Growing Up Canadian and featured many of the actual puppets that appeared on kids TV shows from the 1950's through to the 1990's. Alas Casey and Finnegan, the puppets from Mr. Dressup, were not among those in the exhibit. In their place were cut-out photograph stand-ins. I was a bit disappointed about that but it didn't last long, as the exhibit had the next best thing... Casey and Finnegan's treehouse set that was used on the program! Awesomeness!!! As you can see I'm standing next to it, above, with a big smile on my face. I'm definitely in "my happy place" in this picture!

Many of my favourite puppet characters were featured in this same exhibit, so I was quite happy to see them all too, but seeing the treehouse was definitely one of the main highlights!

Being a puppeteer, I have always collected items that have to do with puppetry, such as newspaper articles, records, and other collectables. Here are all of the nifty items that I have relating to Mr. Dressup.... 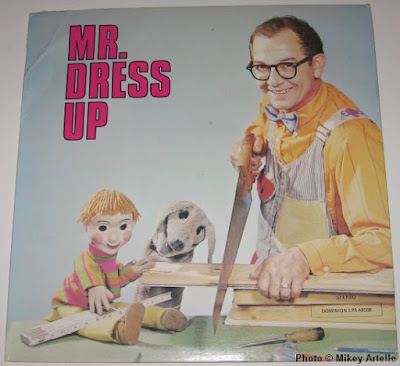 Above is likely the first record albums to be released based on the Mr. Dressup TV series. There are four of them listed on Wikipedia, in which case I'm just missing one. The record album shown above doesn't have a date on it anywhere, though based on the style of the album cover and the photo of Mr. Dressup it was likely released in the late 1960's or sometime during the 1970's. 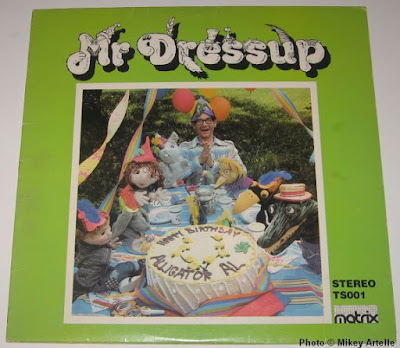 This record is titled Mr. Dressup: Happy Birthday Alligator Al. Based on the copyright date it was released in 1976. 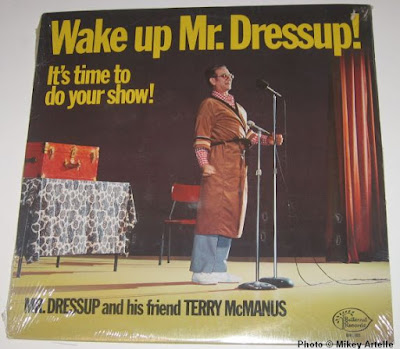 This record is from 1982. My copy is still in the original unopened wrapper! It's interesting and somewhat bizarre that none of these records state that they were produced or co-produced by the CBC. I have a Canadian Sesame Street record album from 1981 that was co-produced by the CBC and it has the CBC logo on the back, whereas none of these records have the CBC logo.

In the late 1980's puppeteer Judith Lawrence who performed Casey and Finnegan retired. The show continued with new puppet characters that had been slowly phased in prior to her retirement so that viewers wouldn't be shocked at the sudden departure of the original puppets. She currently resides in Vancouver with her famous puppet pals. 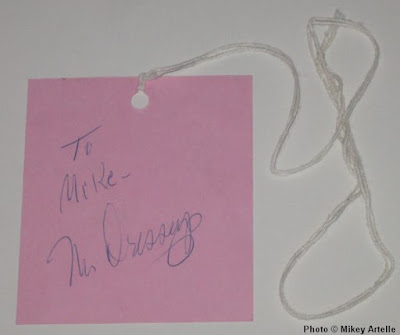 The coolest thing by far that I have in regards to Mr. Dressup is this autograph, which has quite an interesting backstory! It's signed "To Mike" but I regretfully never had the opportunity to meet Mr. Dressup. This Mike is a good friend of mine who lives in Toronto. Back in 1994 Mike had the remarkable experience of being in a choir that sang on stage at Parliament Hill in Ottawa during Canada Day celebrations. This was the year that Ernie Coombs, who played Mr. Dressup, became a Canadian citizen during a ceremony on that very same stage.

At some point backstage Mike was able to meet Mr. Coombs who signed the back of his access pass, as shown above. Five years later in 1999 Mike and I met and became friends during the production of Sock N' Buskin Theatre's Little Shop of Horrors. Long after the production wrapped and we had become better friends, Mike later told me this story about the time he had met Mr. Dressup! My friend Mike then gave this autograph to me, knowing how much I adore puppetry and the Mr. Dressup TV show. To this day I'm still in awe of what a kind and remarkable gesturer that was. It meant a lot to me! We both thought it was ironic that the autograph is signed "To Mike" as though it was meant to find it's way to me. So not only is this item awesome because it's Mr. Dressup's autograph, it's also a meaningful symbol of my friendship with Mike! :) 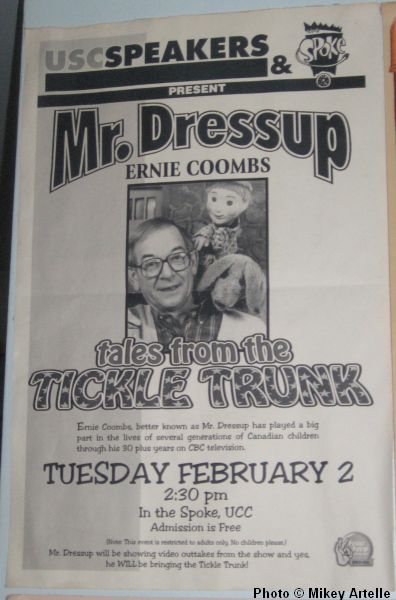 In the late 1990's during his retirement Ernie Coombs toured universities with a stage show titled Tales from the Tickle Trunk. At the time my brother Steven was a professor at Western University, one of the locations on the tour. Above is the poster that was used to promote this event. My brother was thoughtful enough to save one for me. I put it up in my puppet workshop where it's been ever since! 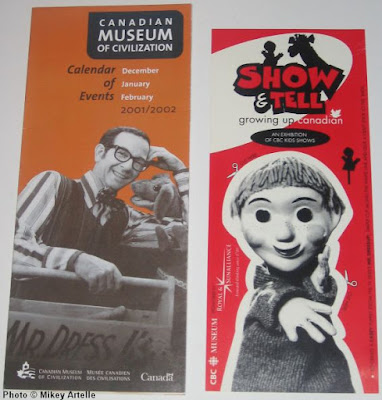 Above left is the flyer for the 2001 exhibit at the Canadian Museum of History in Quebec where the photo at the top of this page was taken. (The museum changed it's name from "Civilization" to "History" around 2010.) Due to a stroke at the age of 73, Ernie Coombs passed away in September of that year shortly before the exhibit opened in December. Prior to this, the exhibit had been mounted in Toronto at the CBC museum. On the right is a promotional card from the CBC Museum featuring Casey. In addition to promoting the exhibit, instructions on the card explain how to cut out the picture of Casey and attach it to a rod to make a stick puppet! 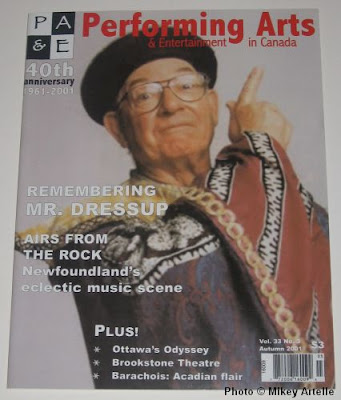 This is an issue of Performing Arts & Entertainment in Canada magazine from 2001. It has a very detailed and well written article about Ernie Coombs. 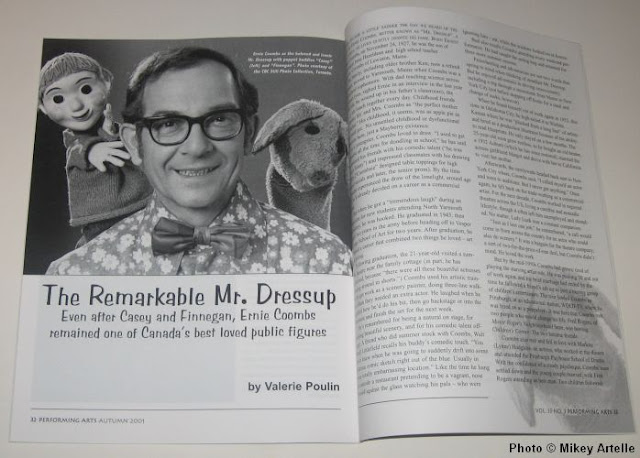 Here is a look inside the magazine at the first two pages of the four page article. I love this early photo of Mr. Dressup and his puppet pals, just as I remember them! 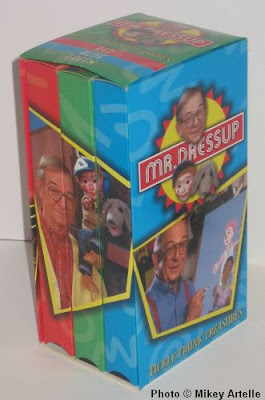 Here is a CBC home video VHS set from 2002. The CBC logo appears on the bottom of the box. Below are the covers for each of the videos in the set. 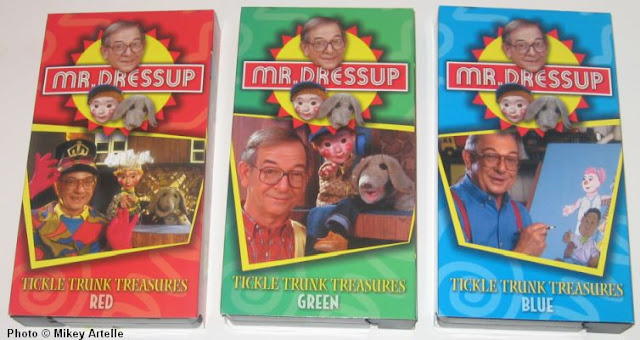 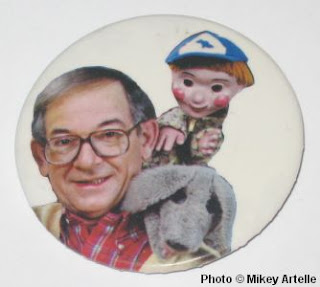 Here is a 2 & 1/4 inch pin back button that I found at a nostalgia show in 2018. There's no copyright info on it so I suspect that it's a home-made bootleg item. There's also no date on the button but the photo of Mr. Dressup is from the 1990's, therefore it would have been made at some point between 1990 and 2018. 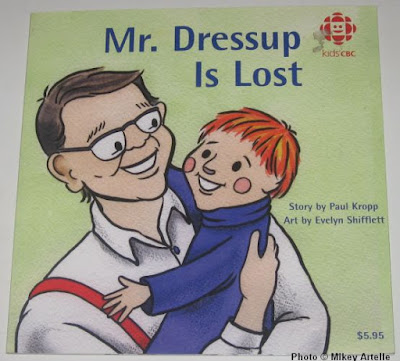 Other collectables that I'm aware of include a fourth record titled Mr. Dressup and Friends, and some books:

While compiling this post and fact checking the info, I came across an online article by CP24 which states "At the 1992 Gemini Awards, comic Mike Myers of Saturday Night Live and Austin Powers listed Mr. Dressup as one of the top five things he loves about Canada." Hear, hear to that Mr. Myers!

It's quite fitting that (on separate occasions) both Ernie Coombs and Judith Lawrence have received the Order of Canada... our country's highest honour.