Please note: It was announced in 2017 that due to budgeting issues resulting from low ticket sales, the Puppets Up Festival is regretfully no longer being offered.
Every year since 2005 a puppetry festival has been held in Almonte Ontario during the second weekend in August. I attend the festival each year and look forward to it every time. For me the Puppets Up International Festival is by far the highlight of the summer. Who needs an expensive vacation to Italy or France to see the some of the best puppeteers in the world when you can just go to Almonte!

The official Puppets Up festival logo

The Puppets Up International Festival is a weekend-long festival that boasts some 10 performers or companies per year, offering 20 or more shows each day. Performances are presented in large tents or indoor venues, and all of these shows are accessible with a one-day pass, or a weekend pass, which is an excellent value. Basically, for the average ticket price of one show at any Ottawa area festival (take your pick!), you get to see as many shows as you can at the Puppets Up Festival.

Here is the Wikipedia page about Almonte, ON: https://en.wikipedia.org/wiki/Almonte,_Ontario 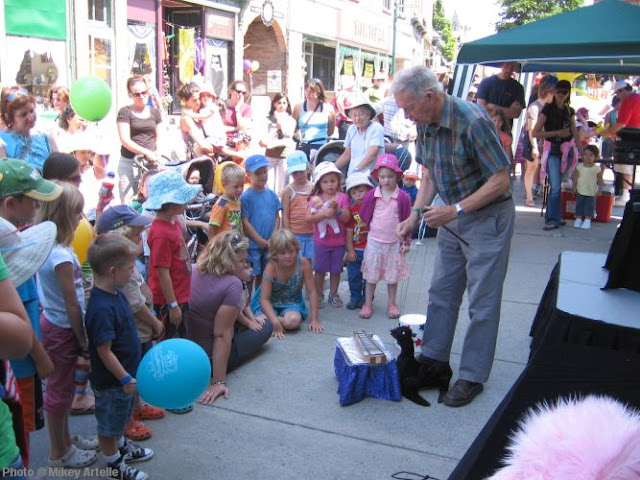 Here is puppeteer David Smith performing some street entertainment for the crowd at the Puppets Up International Festival in 2007. David and his wife Muriel were also featured performers in 2009 with their show "Little Red Riding Hood: A Melodrama."

I'd also like to point out that just because this is a puppetry festival, it does not mean that you need to bring kids with you to attend. The festival is suitable for families, teens and adults. Some of the shows are geared to younger audiences, but the majority of them are suitable for all ages. So if you like live theater you'll certainly have a good time. 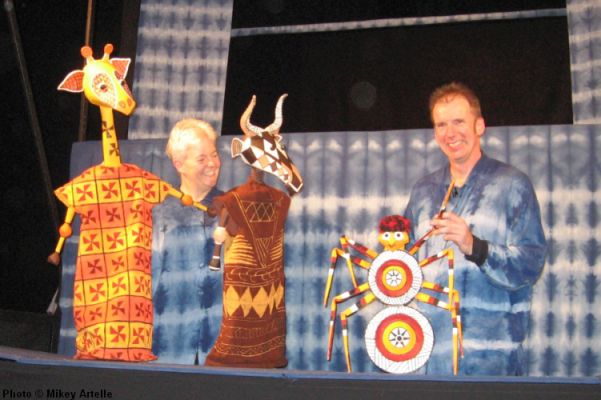 This is Crabgrass Puppet Theater from Vermont. In 2007 they presented "Anansi, Spiderman of Africa." Shown here are puppeteers Bonny Hall and Jamie Keithline with some of the characters from the story. Also in 2007 Waterwood Theater performed O is for Ogre. Shown above is puppeteer Dan Wood and the Ogre from his show. The company also performed "Tales from an Empty Fridge" for the inaugural festival in 2005, as well as "Mouse Tales" in 2006. Waterwood Theater is the puppet company that created the original Dudley the Dragon puppet costume, which Dan performed in the live show "Conserving Kingdom" in schools across Ontario in the 1980's. The Dudley the Dragon costume that was later used for the TV production based on the live show is now in the collection at the Canadian Museum of Civilization. This was before the character had his own regular TV program, "The Adventures of Dudley the Dragon". Dan was kind enough to give me an original "Conserving Kingdom" poster and a button with Dudley's image. I also have the original "Conserving Kingdom" comic book that was given out to students at the live shows, as I was one of those students! I've been a fan of Dudley ever since!

I enjoy the atmosphere in Almonte that is created for the festival, which is very much a big street party celebrating puppetry. This includes many free events for visitors such as wandering street performers, live music, the "Balcony Puppeteers", and a puppet display in virtually every storefront window. In addition there is a vendors area where artisans sell hand-made puppets and a craft tent for kids to make their own craft puppet. There are also many interesting stores on Mill Street to browse through if you are in a wandering mood, along with local restaurants and Baker Bob's! 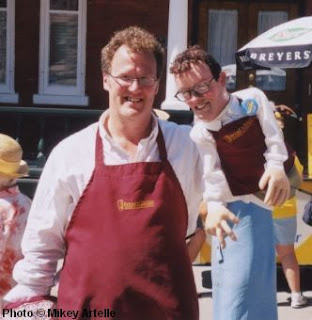 Baker Bob and his puppet likeness, made by Noreen Young 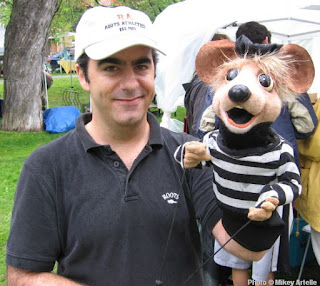 Puppeteer Jamie Douglas is one of the Puppets Up Festival's "Balcony Puppeteers". I'm not sure what year this photo is from, possibly 2006 or 2007. He's holding one of Noreen Young's mice puppets. Jamie is a very funny puppeteer. You may also know him as Creepy Baby from You Tube. Here's one of his videos: http://www.youtube.com/watch?v=yst2UTcvC1k

One of the of "celebrities" at the festival is Creepy Baby.

And if that's not enough, they also have a parade each day at about 2:30 starring all of the featured performers and their puppets, as well as local puppeteers, musicians, and costumed characters. Not only that, but if you grew up watching the CBC and Disney Channel program "Under the Umbrella Tree", keep an eye out for Iggy, Gloria and Jacob as they like to hang out at the Puppets Up festival too...especially in the parade! So there's plenty to see and do even if you don't go to watch any of the puppet shows (which would be a shame!). 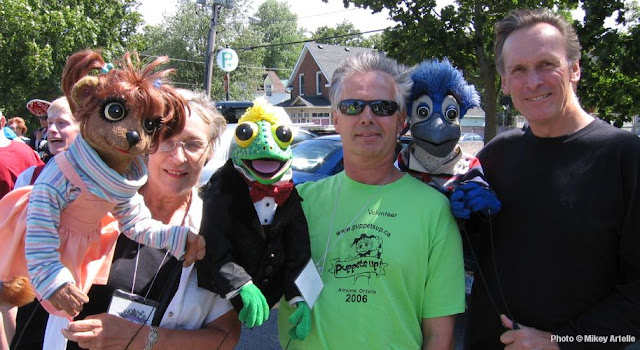 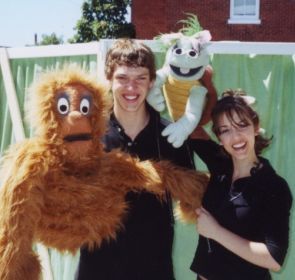 Ben Durocher and Steffi DiDomenicantonio doing some street entertainment at the inaugural festival in 2005. The following year they returned as featured performers with their show "Johnny's Midnight Adventure". 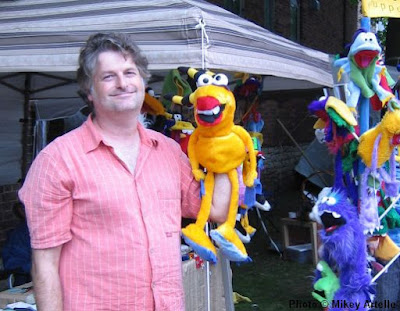 Here is puppet designer Steven Barkley, founder of Diabolo Puppets, at the festival in 2009. Steven has been a vendor at The Puppets Up festival from the very start (at least it certainly seems that way!). He makes awesome puppets that are very popular. I have about a dozen or more of them in my collection! If you come to Puppets Up be certain to stop by his booth in the vendor's area! 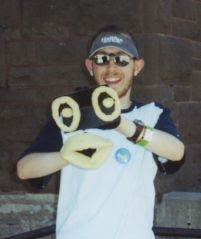 Puppeteer Grant Harding doing some street entertainment at the festival in 2005.

Below is a list of the featured performing companies or artists for each year along with some photos. I hope you enjoy looking through these, and that they convince you to come out to the festival. It's a lot of fun!

Here is a bookmark that was used to promote the festival in 2005. A new bookmark and poster are produced each year. 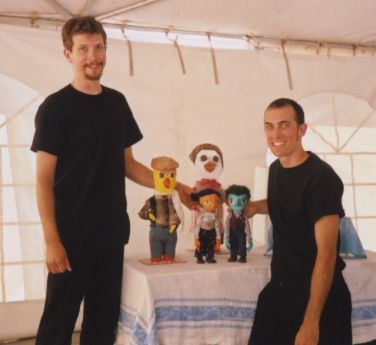 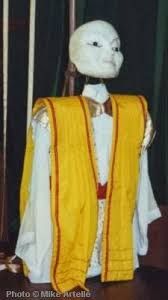 Here is Rag and Bone Puppet Theater's Emperor puppet from "The Nightingale", performed at the festival in 2005. The company also performed  "A Promise is a Promise" the same year. 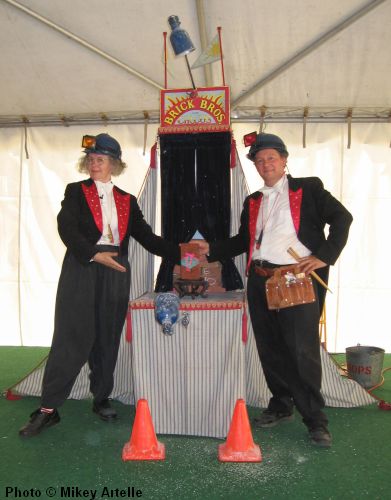 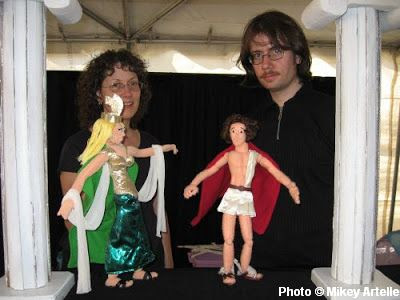 Here I am on the right with my mother Peggy Artelle just before performing our show Heroes Past and Present at the festival in 2006. We're holding up our Athena and Perseus puppets. Gloria Gopher and Iggy the Iguana themselves (performed by Noreen Young and Bob Stutt) introduced our show. That was awesome! 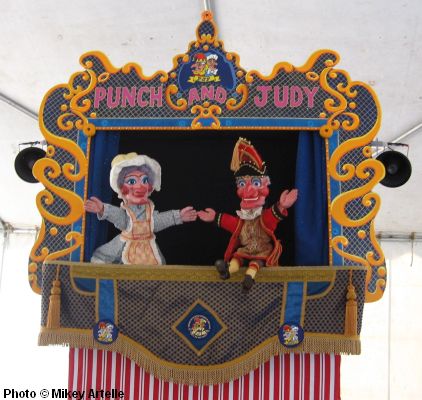 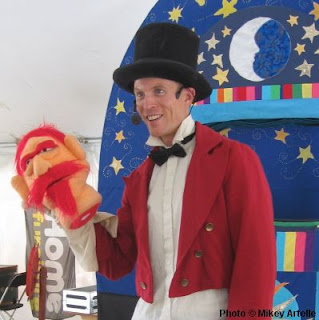 In 2007 puppeteer Tim Holland presented Foolesque, (shown above)
and returned in 2008 with The Puppet Tamer. 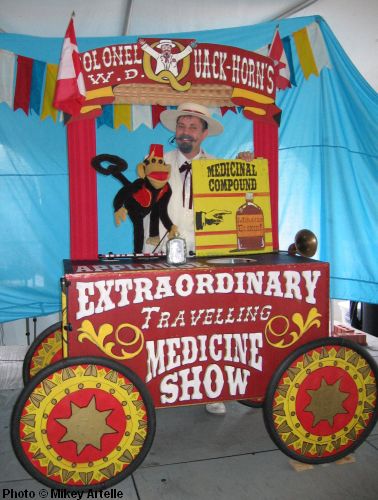 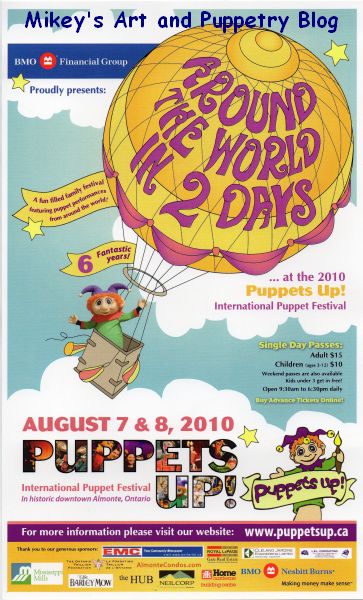 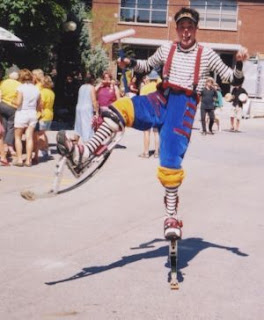 Adam Zimmerman as Zip-e the Clown in 2005. Adam has performed as a street entertainer at almost every Puppets Up festival. In 2010 Adam and fellow clown Karine Roberge were featured performers with their show Zircus Clownz. Many years ago (before the first Puppets Up festival) I saw Adam's puppet play based on Alice in Wonderland at Ottawa University. He's very talented at both clowning and puppetry.
Aug 6 & 7, 2011, year 7

Frogtown Mountain Puppeteers from Maine USA have been featured performers almost every year of the festival. Their show Everybody Loves Pirates is a festival favourite, and extremely funny! 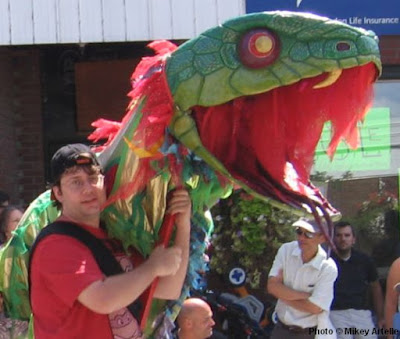 Here I am with a giant snake puppet in the Puppets Up Festival
parade in 2013. Some volunteers were operating the tail. 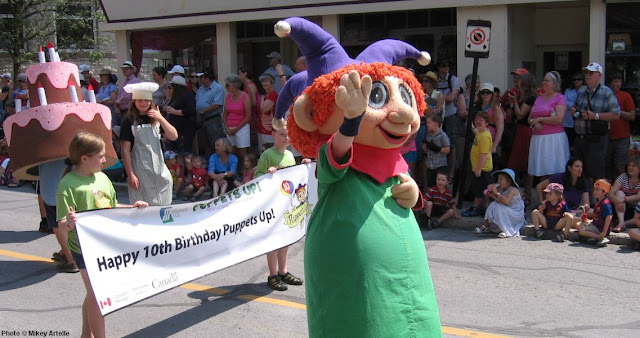 Here is Nick the mascot in the Puppets Up Parade celebrating the festival's tenth birthday!

Visit the Puppets Up International Festival Website for more up to date information:
http://puppetsup.ca/


This link will take you back to the Home Page of this blog:
http://mikeyspuppetryblog.blogspot.ca/

The information on this page is from Mike Artelle's puppetry archives and from the Puppets Up website.