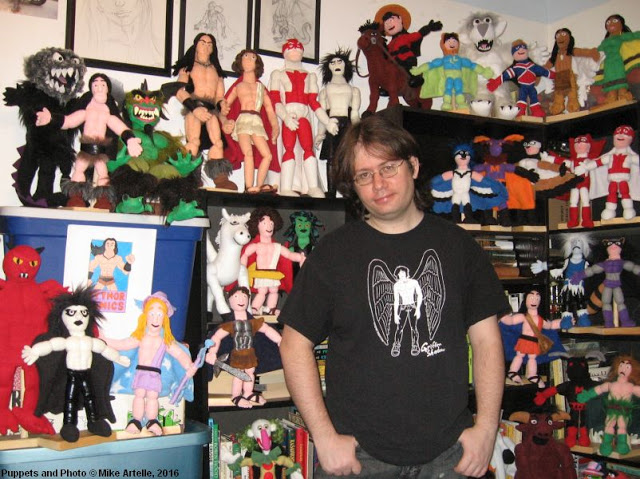 Here I am in March 2016 with a selection of my hand-made Pythor Comics superhero puppets!!!

This is how I have my puppets on display in my workshop! The four original larger sized puppets (which are about 20 inches tall) are seen on top of the shelf on the left of the photo: Pythor, Perseus, Canadian Crusader and Griffon Shadow. These all appeared in my show Heroes Past and Present which premiered in 2006 at the Puppets Up Festival.

All of the smaller sized puppets (about 12 inches tall) were made as toy puppet prototypes which I would love to someday have manufactured. It takes a bit of cash for that however, so until then I'll have to share them with others this way on my blog! I've designed and made a series of at least 25 of these toy puppets, along with a horse for Melvin Maples (Canadian Crusader's alter ego) from my Canadian Heroes series and Pegasus for the Greek Myth series. There are others "in progress" too, but I thought I should put the brakes on! I'm running out of room!!! :) Ah, but too many puppets is a good problem!

Posted by Mikey Artelle at 6:54 PM